To develop an eye catching exhibit that celebrates and encapsulates the living spirit of the Shawnee Tribe.

When 3DS - Three Dimensional Services was asked to build the Shawnee Tribe a feature exhibit for the lobby of their new Cultural Centre, they tasked Double Dare Design with developing a concept that would meet their client's the cultural, aesthetic and budgetary requirements.

We worked closely with the centre’s curator to understand the tribe and its visual culture. By conducting multiple interviews and follow-ups with the client, we were able to establish an open dialog that lead to a design approach that was culturally fitting.

A preliminary survey identified cultural assets that would serve as our inspiration for the exhibit; details from dance, textiles, painting, pottery, and other arts were wound into the initial exhibit concept. The colour palette is bright and warm, and ties in closely with the recently adopted Shawnee visual identity. A fresh, contemporary aesthetic was used to reflect this dynamic living culture.

The rectangle around the top of the exhibit represents the Shawnee dance grounds. The eastern and western entrances are expressed with an inlay of coloured acrylic. The same colours glow from behind the dimensional title at the top of the exhibit, providing a backdrop for social media photo opportunities.

A central visual element of the exhibit is the star from the Shawnee flag, which symbolizes the heart of the Fire, the Fire at the centre of the Shawnee fireplace, and the Fire around which the Stomp dance is performed. The millwork, which is built of white oak – a wood that is sacred to the Tribe – radiates from this focal point.

To illustrate a continuum of past and present culture, historic and contemporary artifacts are blended into a single display, layered with images and the sound of the stomp dance. To showcase current Shawnee cultural arts, a portion of the exhibit is dedicated to display of creations made in workshops held at the Center.

As a nomadic group with a history of colonial oppression, very few historical items of the Shawnee remain. Working with the fabrication team at 3DS, we developed details to ensure that any important artifacts would be safe and secure while on display. We also collaborated with them to address budgetary, operational and manufacturing requirements. 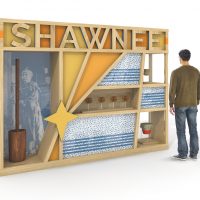 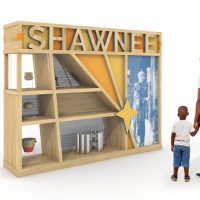 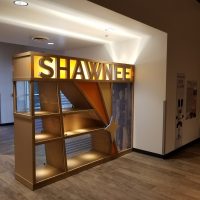 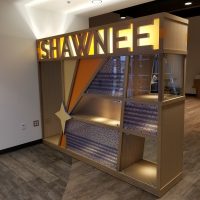 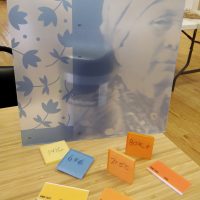 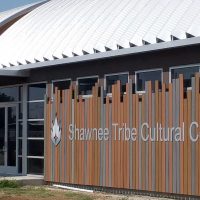 Looking for an exhibit that showcases your culture? We'd be happy to design it for you!